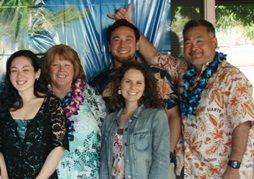 After 39-plus years, Advent is saying goodbye to one of our longtime staff leaders, Karen Winans Shomura, who will be retiring this summer. She has been with Advent since before its inception, and has held several positions within the organization.

Growing up in Arizona, Karen attended Biola College in Southern California in 1976. Shortly after receiving her bachelor’s degree in sociology and a minor in biblical studies, she was introduced to Les Neal, the director of Arbutus Youth Association in San Jose. Arbutus, a group-home program for troubled youths, was a ministry of the San Jose Rescue Mission (later to become CityTeam Ministries).

In February 1976, at the age of 22, Karen began her career as a resident counselor at the girls’ home, and in that position supervised as many as six delinquent girls.

Structured similarly to the current Advent position, the resident counselors were responsible for the physical and emotional care, medical appointments, and educational needs of the clients.

Karen recalls an incident that happened one day as she was transporting the girls from the Browning home to the San Tomas home.

“I was driving an old station wagon (we always had these ancient rundown station wagons) with the girls in it, and we were pulled over by the police. I was in a hurry because we were headed to a retreat,” she smiles.

“One of the girls in the backseat (who had quite a mouth on her) jumped out of the vehicle and started talking to the officer. I had no idea she was advocating for me and I thought I might be headed to jail.

“The teen asked the officer, ‘Are you really going to give a ticket to this poor woman who is making basically no money and has to drive around delinquent kids? How would you like to have her job?’

“The police officer took me aside and said, ‘You’ve got your hands full! Have a good day.’ Then he sent me on my way. It definitely ended better than I thought it would!” she laughs.

In February 1977, Karen became the first senior counselor in the group home program where she provided support to two residential group homes, the staff and client. She also provided training and guidance to the staff and supervision of the implementation of each client’s treatment.

About that time, Karen met Kevin Shomura, who was also working for Arbutus and whose supervisor was Mark Miller, former Advent chief executive officer. Karen and Kevin were married in 1979.

In addition to being a newlywed, Karen became a home supervisor/caseworker and remained in that position until February 1986. At that time she was supervising the residential treatment program overall; interviewing potential clients to see if they were appropriate for placement; providing various individual and family therapy; and establishing/maintaining relationships with other placement agencies, schools and community resources, some of which continue to this day.

In February1986—the year Advent Group Ministries was born—the Arbutus staff left CityTeam and formed Advent. One of those employees was Karen, who became the group home program director. Her new responsibilities included managing the budgets for all six homes, staff, treatment and clients. She was also in charge of recruiting, hiring, training and supervising the group home staff.

In June 1986, after completing her master’s degree in marriage, family, and child counseling at Santa Clara University, Karen spent several more years in her role of group home program director.

Then in November 1993, she added clinical director to her role and began overseeing all the aspects of the six group homes.

In December 2003, Karen became the clinical and intensive outpatient program director, and the program expanded from one site to six sites for outpatient drug and alcohol treatment, including four sites with mental health therapists.

In 2013, Karen launched a prevention program called Too Good for Drugs, which is currently operating in 29 schools in Santa Clara County. “The outpatient program has grown tremendously and the staff has been incredible,” says Karen. “I have really enjoyed working with them.”

According to Karen, three attributes are desirable for incoming clinicians: 1) a master’s degree; 2) Spanish fluency; and 3) a drug and alcohol certification. “It makes a person incredibly marketable, especially in the Bay Area and all over California,” she adds.

Former CEO Mark Miller says, “Karen represents the heart of this ministry. She has dedicated her life to the staff and children of Advent. Her desire is to love the Lord and serve the needs of others. Her passion and loyalty to the agency is to be commemorated.”

When asked why she thinks Advent is still around, Karen exclaims, “We are God’s agency. As long as He wants Advent around, Advent will be around.” She also credits her tenure to the staff and the specific departments where she served. “I have loved the people I’ve worked with, from the staff to the clients,” she beams.

Karen adds, “My very first and favorite position was resident counselor. It was one of the most difficult, yet one of the most rewarding. Relationships with the kids make it all worthwhile.”

Karen and Kevin have two grown children, Kirstin and Kendal, as well as daughter- in-law Genelle.

Kirstin and Kendal grew up thinking of Advent staff members as family and the staff retreat as a family vacation. “Neighbors would ask where this vacation spot called Ladybug Farm was because the kids had talked about it so much,” Karen says.
When asked what her plans are after she retires, Karen laughs, “I’m looking forward to waking up in the morning and not having a lot of plans. I want to sit outside and drink tea in the morning, walk my dog, work in the garden, and organize my photo albums. I would also like to travel as much as possible.”

Karen has been a true gem to Advent and she will be sorely missed.