From Group Home to Family Home 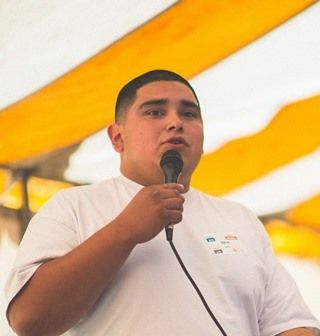 “It’s scary!” exclaims Steve, as he shares his feelings about leaving the security of Advent. “Advent’s been good,” he says. “I’ve done a lot here that I had not done in other recovery programs—everything from camping and snow trips to participating in the Culinary Academy at Rebekah’s.”

Steve was 17 when he arrived at the group home on December 17, 2012, after being referred by Juvenile Probation in Monterey County.

He explains that for him Advent was the safe harbor he desperately needed after his mom left home. His dad had not been supportive, so Steve was pretty much struggling on his own, and that’s when he started using drugs to take away the pain.

He eventually ended up in jail and then came to Advent, where he experienced a spiritual awakening.

Stacy Ferguson, caseworker, says, “I sensed that Steve had a lot of potential and I wanted to find him a place to live after he left the program ... and the wheels started turning!”

She and her husband Daren had met Carlos and Damaris Fuentes four years earlier at Family Community Church, and since they all have children about the same age they became good friends.

Damaris had worked at a social service agency for 10 years, which provided a positive background for their becoming an Advent Friendship Family at the St. John home where Steve lived.

Carlos and Damaris report, “Initially we thought Steve was serious, quiet and a bit cautious, but we could tell he had a sense of humor because we would see him joke around with others. But at first we thought he didn’t even like us.”

The couple then heard Steve speak at the Advent barbecue in September and they were impressed with his testimony.

Damaris continues, “As we spent more time with him during the Monday night visits, and he got to know us more, he opened up and his personality really came out. Steve is a great kid, with good insight and a big heart. We have really enjoyed spending time with him and the other boys at the group home.”

Meanwhile, Stacy had been praying that God would open the door for Carlos and Damaris to form a relationship with Steve, and it was her hope that after his completion of the program he would be able to live with them.

She contacted Carlos and Damaris to see how things were going with Steve, then hit them with the hard question: Would they consider having a young man live with them after he completed the program—namely, Steve?

“Funny you should ask,” they replied, “we were wondering where Steve was going to go once he left Advent.”

Carlos and Damaris told Stacy they are grateful to have met Steve and they would be happy to welcome him into their home. “He will be a great addition to our family,” they beamed.

Steve, now 18, began spending weekends with the family and says, “They seem really nice, but I’m going to miss the relationships and structure I have with the people at Advent.”

Steve will graduate from high school in June, and when asked what he wants to do after graduation he replies, “I’m not sure.” But he is looking forward to getting sound guidance from Carlos and Damaris!