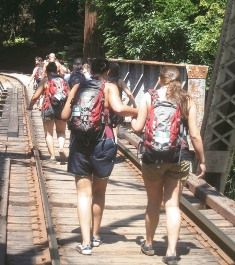 The girls had all been looking forward to April because it meant spring break—a time when their normal school routine would be interrupted with new adventures.

The fun began with an evening out on April 7 when they went to Friendship Mentor volunteer Wendy Close’s home for dinner.

Tuesday turned out to be an incredible day at the Oakland Zoo, with counselors Linda Balmaceda and Bryanna Tabler, as well as Staci Dayley, Friendship Mentor volunteer, accompanying the excited teens. They had lots of funny stories to tell about the animals—even one about some wild chimps that were spitting on them!

Pfeiffer Big Sur State Park was on the agenda for Wednesday, with a two-night camping trip among the redwoods. Jaleesa Castrellon and Natessa Martinez, counselors, reported that two of the girls had never been camping before and all the kids were more than excited to be outdoors as they pitched the tent and set up camp with enthusiasm!

In the evening the gals roasted millions of marshmallows and searched the woods for firewood. The counselors were thrilled to see their team spirit and how they encouraged each other in so many ways.

Natessa says, “On Thursday the girls set out for a hiking adventure and scaled the mountain to Pfeiffer Falls. Then, after a hard hike, they went on to the Valley View Trail and were able to look out at the majestic scenery. Right above them was a family of condors flying overhead. It was awesome.”

A few of the not-so-athletically inclined girls had trouble making it up the mountain, but were determined to succeed, and when they did they were especially proud of themselves for their perseverance. Then once down the mountain the group went to the river gorge to relax and play in the water.

While the girls were hopping on the rocks at the gorge, one lost her flip-flop. After unsuccessfully attempting to retrieve it, she was very disheartened. When the other gals saw her distress they literally jumped in to help her, and while walking in the river they discovered where her shoe had lodged. So the lost shoe had been found and the girls were all ecstatic!

After everyone shared, they all took turns giving affirmations and compliments. It was an emotional time, with two girls in tears. Worship music was played and the girls basked in the presence of God, followed by more stories, laughter and marshmallows!

On the trip home the campers enjoyed one last stop at Carmel Beach, and then it was back to the group home. They were sad to leave the beautiful nature they’d enjoyed, but they were content to be home.