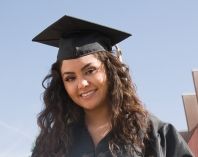 The Step Up! program has been in full swing, with one graduate and two potential grads working hard to complete the program and achieve their goals.

Robert, a very pleasant and respectable young man, entered into treatment in March, and appeared to be more like an adult than a teenager. And though he was only 15, he had been trying to provide financial assistance for his family.

Over the course of seven months, at times the staff had to encourage Robert to have fun and be a teenager. This has been a learning curve and was primarily achieved on the basketball court. The young man’s love for sports was obvious and he had shared his grief at not being able to play football for his high school because he had been expelled.

A mentor for Robert has made a huge difference as the two spent time together during the summer break, and his self-esteem grew significantly.

Starlene Soto, clinician, adds, “Being in Step Up! has helped him consider his choices more thoughtfully, where before his choices would be more impulsive.”

Robert’s graduation ceremony took place in October and included a barbecue and ice cream cake. Robert now has the opportunity to go back to high school and complete his education, and he plans to learn the construction trade from his mentor.

Starlene says, “It is clear that this young man will be successful at whatever he does because he has learned the power of choice. He is the real example of making lemonade from life’s lemons.”

When Helen entered into treatment in April, she arrived with an attitude—she was one angry girl who had already figured out how to cope with drugs and alcohol. The circumstances that got her expelled from high school and sent to community school were not pleasant.

Star reports, “The interesting thing about all this is she rarely missed a class in the Step Up! program, and when she did it was due to the same behavior that got her removed by probation and sent to juvenile hall.”

After some time in the Step Up! program, Helen’s behavior began to turn around and she was completely different and open, willing and ready to do the work required to change her life. Star says, “The really cool thing I’ve noticed is watching her decision-making process. She now gives herself the time necessary to evaluate her choices.”

Helen has been in the Step Up!program about seven months and is in the process of completing her last treatment plan. She is eagerly looking forward to her graduation in the near future.

April was also the Step Up! enrollment month for Donna, a young lady who had absolutely no idea that what she had been doing was illegal. “Donna was driven to orientation by a police officer, and her learning curve of discovery has been delightful and comical. Her misconception of her behavior was probably why she was escorted by the police,” Star muses.

This intelligent student has applied herself diligently so she will graduate on time, and she attended Step Up! during the summer while attending summer school. She is also currently going to night school to get back on track.

Donna plans to attend a 22-week charter school in January 2015 after her Step Up! graduation, which she is determined will take place in the very near future.