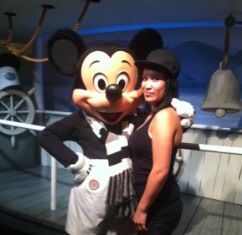 Summit staff purchased Raging Waters passes for Advent’s six clients, and the excited girls were able to go five times during the summer. The teens were chilled and thrilled on the rides and slides as the water raged around them.

Another more serious outing was volunteering at the Mabie Skilled Nursing Facility in Hollister. The young ladies were there to bring smiles to the elderly patients, and one gal said it was her favorite summer outing. This is an ongoing volunteer activity where the teens talk with the patients, read stories to them, and even paint the women’s nails.

From July 14-19, Wendy Close, Friendship Mentor Program volunteer, invited the clients on a one-week houseboat trip to the Delta, near Stockton. The girls loved the water-skiing, banana boating and knee-boarding. Each evening they attended a service where they were able to worship and hear about Jesus. By the end of the week all six clients were baptized or had rededicated their lives to God.

Another exciting adventure took place from July 29-31 when the six girls, two staff and one intern went camping and canoeing at Hume Lake in Sequoia National Park.

Disneyland was the grand finale where the girls headed on August 28, and for some of them this was their first time at the theme park. The kids had earned extra money for the trip by working at a horse-boarding facility, cleaning stalls and doing other chores. Amazingly, the industrious teens earned $300.

Other summer activities included roller skating, bowling, the movies, going to the beach at 17 Mile Drive in Pacific Grove, kayaking in Capitola, hiking at Pinnacles National Monument, and going to the animal shelter.

Comments from the clients included:

“We saw a sea otter while we were on the kayaks in the ocean. It was so pretty! It kept swimming away from us.”

“I enjoyed the drive to L.A. But I really liked the rides at Disneyland and meeting the characters. It was my first time there.”

“I liked the spirituality that I experienced on the houseboat trip. I also enjoyed the banana boats a lot.”