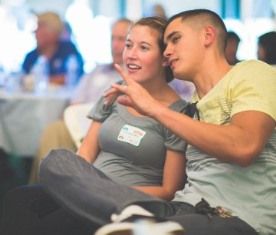 As friends arrived at the Gateway group home on that beautiful Saturday in September for Advent’s 21st annual barbecue, they were greeted by staff who took them on a tour of the facility.

First on the agenda was the on-site school, which had just been up and running about six weeks. The school is where clients go five days a week to work on high school credits. And of course each student’s goal is to complete credits for his high school diploma.

The home was then toured, where Addictions Counselor Leslie Dartt explained that she works one-on-one with the recovery program clients and helps them with coping skills and how to deal with their feelings of anger. The boys also regularly attend Alcoholics Anonymous and Narcotics Anonymous 12-Step meetings.

Each of the three bedrooms accommodates two boys, and all the guys have specific daily chores, including being chef one night a week. On that night he is in charge of dinner and gets to choose whatever he wants to serve. The group usually dines together as a family.

Exhibits were set up outside where staff were available to answer questions and give an in-depth explanation of the various Advent programs.

A delicious barbecue was being cooked and served while the Imperial Gallon quartet provided fantastic music, including “oldies” like This Little Light of Mine and The Old Rugged Cross.

During the program there were somber faces, as well as lots of cheering, as guests listened to the Advent speakers who shared testimonies of where they had been and how Advent had helped them move from despair to a promising future.

Steve explained that for him Advent was the safe harbor he desperately needed. His mom had left home and was gone for three years, which hurt him deeply. His dad was not supportive, so Steve was pretty much struggling on his own, and that’s when he started using drugs to take away the pain.

He eventually ended up in jail and then came to Advent, where he experienced a spiritual awakening. Steve says, “I am now clean and sober and at peace with myself, and I no longer feel the need to have to try to make people like me. At Advent I developed relationships and I was with people who genuinely cared about me.”

A mom shared her experience of reuniting with her children at The Refuge, and Greg and Cheryl Hock introduced their human trafficking ministry—The Nest—as they begin a new partnership with Advent in that endeavor.

Another highlight was announcing the Volunteer of the Year award, which was presented to David Kissner, former Advent schoolteacher and mentor to the group home boys. He continues his involvement with Advent and is actively taking the teens on camping trips (see article By the Light of the Silvery Moon).

CEO Mark Miller concluded the evening by thanking everyone for coming. He reviewed Advent’s current status: 1) three group homes; 2) six outpatient sites; 3) in-school drug/alcohol prevention; 4) full-time mental health counselors; 5) The Refuge; and 6) The Nest. He adds, “Advent is committed to providing care. Jesus offers new life and there is tremendous hope. Treatment works … but it is hard! We do our best to communicate to the kids that they are worth something.”