Life Thrives when we Serve 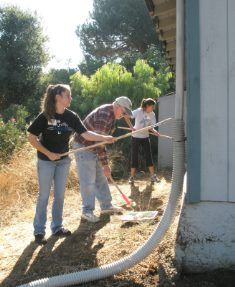 A big yellow church bus carrying 38 people could be seen making its way south to Morgan Hill that October Sunday. But this wasn’t a bunch of folks on their way to Sunday school. This was a troop of 38 volunteers from Saratoga Federated Church (SFC) who were taking part in the church’s Serve Sunday service day, and their destination was Advent’s Summit home.

Gerry Foisy, Advent's maintenance manager, had 15 gallons of paint and numerous cleaning supplies ready for the big day. "It was quite the undertaking," Gerry observed. "We don't usually have work parties this big—or on Sunday—but these volunteers were amazing!"

The group arrived at 10:00 a.m., and after an introduction and instructions from Gerry, they all jumped right in and got to work. There were 30 people, ranging in age from teens to some in their eighties, who painted the exterior of the home, while another group of eight volunteers deep cleaned the bathrooms and kitchens. Other tasks included raking up yard clippings and scouring a barbecue.

Bob Leonard, longtime SFC member, suggested Advent as one of the projects for Serve Sunday. And though Bob is 81, he was one of the brave volunteers who climbed a very high ladder to the second story of Summit and happily painted away.

Lunch was served at 12:30 in the Summit gym, and while the workers dined, Natessa Martinez, senior childcare worker, gave a brief overview of Advent and answered questions.

"We are also very grateful for the diligence Gerry put into prepping this work party. It was not easy, but he did it efficiently and had it organized so the volunteers could get right to work as soon as they arrived. He is a gem," Stephanie beams.

CEO Mark Miller made a surprise appearance to thank the volunteers during lunch. "Saratoga Federated Church is very dear to us,” he shared. “They have supported us tremendously over the years and we are extremely grateful."

As all the staff and volunteers joined hands in a circle, one of SFC's elders prayed for Advent. Then the weary workers (many of whom were wearing paint!) climbed back on the bus and returned to SFC.

In lieu of a church service, SFC will again be doing Serve Sunday projects three more Sundays in 2014—February 23, June 8 and August 17.

One of SFC’s themes is Life Thrives When We Serve, which was certainly demonstrated by the many selfless, hard-working volunteers on Sunday, October 20!