By the Light of the Silvery Moon 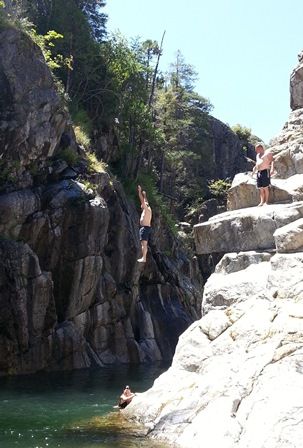 No flashlights were needed as the full moon cast an eerie glow on the mountain trail that July evening when the Advent boys trekked through the trees until they reached Mount Zion—a rocky hill they climbed in the Grouse Ridge Recreational Area.

Mount Zion provides a breathtaking 360-degree view of Blue Lake, as well as sighting numerous other lakes and peaks. Also visible was the soft glow of Sacramento lights, as well as an unparalleled view of the stars and moon.

The guys had never done a night hike before, so this was quite an adventure. There was very little complaining about the climb, even though the altitude was affecting most of them. At the top, they stayed for almost an hour—in the middle of the night—lying on their backs and taking in God's spectacular shooting-star show.

David Kissner, volunteer counselor and guide, reported that the July camping trip was a huge blessing for the St. John and Gateway group home kids, and there was a lot of answered prayer from beginning to end. “Everyone stayed safe from bears, and no one was injured during the water recreation, climbing and sliding down rocky hills, jumping off cliffs into cold rivers, and the group’s many other exciting adventures,” he adds.

There is always a concern about how the guys will behave, as negative attitudes can have such a huge destructive impact on the fun and spiritual communication on a trip. But these kids all had a terrific outlook, and even the ones who were not particularly into camping had a good time enjoying the great outdoors. The counselors were also very proud because the boys showed respect to other people and to the wilderness.

Dave continues, “The group had some powerful times of conversation and prayer around the Scripture. Our evenings around the fire were the prime time for hearing an account from the Bible and hearing the Good News about Jesus through those stories,” he said.

Discussions that followed were sometimes really cutting to some deep stuff. During hikes and other activities, there were a number of opportunities to have longer in-depth, one-on-one conversations about spiritual truth and how it affects the boys' lives.

One of the highlights for Dave was welcoming the boys into camp. He says, “While a few of them had been camping before, their experiences were of the much more civilized type, in campgrounds and with lots of people and where the wilderness is of a much more forgiving type.”

When each group arrived, Dave met the kids on a poorly marked dirt road in the Tahoe National Forest and gave them a safety brief about bears, rattlesnakes, getting lost in the wilderness, wildfire prevention, etc. Needless to say, he had their rapt attention.

The guys then carried their things up to the lakeshore, where it all got loaded into the canoes and they paddled to camp on the far shore of the lake—a lake that would be their own for most nights, as no one else was around.

The campsite, though comfortable, was completely undeveloped and remote. Dave adds, “Watching the boys take in this experience and everything around them was a lot of fun. Some thought it was crazy to be out there. Some thought it was the coolest thing ever. All were somewhat in awe of where they were.”

One of the guys, exclaimed, “It was my first time swimming in a river, but my favorite thing was the night hike. I loved the climbing, the views and the adventure. Everything was so organized and the days were filled with activities.”

Tai Sherod, senior child care worker at St. John, concurs, “My favorite thing was the night hike. It was crazy and very meaningful and something none of us had ever done before … and we all got to experience it together.”