Advent Interviews Trisha from The Refuge 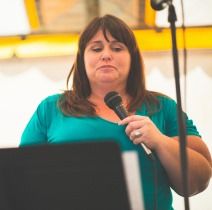 Advent: How did the events of your life drive you to The Refuge?
Trisha: I was born August 27, 1974, in El Centro, California, into the most awesome family a kid could ask for. I had a mom and dad who loved me, and 19 months later I was blessed with a little brother. We moved to Sunnyvale, California, when I was about five, because my dad had accepted a pastorate at a Baptist church. And I was a pastor’s kid for the next eight years.

Advent: What changed when you were 13?
Trisha: When I was 13 my parents divorced and I experienced the world and all its “glory” for the first time. I wasn’t a pastor’s kid anymore, but a naïve teenager experiencing typical teen stuff—dances and boys. I lived with my mom, who was then working to provide for us. I had a lot of time on my hands to get into trouble and, needless to say, it is no shock that by the age of 16 I had dropped out of school to work, and at 17 I had become pregnant with my daughter, Cassandra, who is now 20 and a student at Fullerton State.

Advent: How did you feel about your life at that time?
Trisha: At that point in my life I was still fairly “good.” I continued to work for a year or so and took care of Cassandra. I had smoked weed a few times but didn’t like it too much. It wasn’t until I was about 28 that I had my first experience with other drugs. I started smoking weed more often and tried meth a couple of times with my best friend.

Advent: How did your behavior affect Cassandra?
Trisha: Within about two years Cassandra (11) moved in with her dad because she didn’t like the company I was keeping. She had just graduated from the D.A.R.E. program (the drug prevention program of the 90’s). I was single and lonely, once again with a lot of time on my hands, so I filled the void with drinking, drugs, and the wrong crowd. It was at that time when I met Robert, the father of my two youngest children.

Advent: What did you do when you found out you were pregnant?
Trisha: I knew within the first month that I was pregnant and that I had to stop using drugs, so I stopped cold turkey. I moved back in with my mom and had a healthy pregnancy. I gave birth to Noah, who is now eight, and I stayed clean because I wanted to be a good parent and I wanted to breast feed.

Advent: So you were finally on the straight and narrow?
Trisha: Don’t I wish! About three months after Noah was born I started hanging out with my old friends and began using again. I quickly became pregnant again with my third child, Natalie, who is just one year younger than Noah. I knew I was pregnant, but didn’t want to stop using, so I didn’t officially find out until I was about three months pregnant. And even then it took me a few weeks before guilt got the best of me and I finally stopped using. After Natalie was born, I stayed clean and breast fed for about three months before I started using again.

Advent: How did you deal with motherhood?
Trisha: I enjoyed being a mom and didn’t experience depression, nor was I overwhelmed. Noah and Natalie were happy babies and easy to care for. I had gained weight and knew that meth would be a quick weight-loss program. However, unfortunately I lost more than weight!

Advent: What else did you lose?
Trisha: I would take care of the kids during the day and would hang out with friends in the garage at night while the kids were sleeping. We would play cards and dice and get high. Eventually my drug addiction took over and I started using while the kids were awake. This was the worst time in my addiction. I was a hot mess. I was mom to three- and four- year-olds, living with their father’s family, when I got arrested for being under the influence. In December 2010, my children were taken from me and placed with my brother and his family. I will never forget that night! I was scared, mad, and confused. I felt like a complete loser.

Advent: Tell us about the transformation that took place at The Refuge.
Trisha: It has been a long, hard road, but I honestly wouldn’t change it for anything. I came to The Refuge about 18 months ago when I had been just reunited with my children. God is so awesome and every day I look around at the people He has placed in my path and the opportunities He has given us. The Refuge has been just that—a refuge—a place where we have been able to become the family that we are today: stronger, accountable, grateful, healthy, independent.

Advent: How do you feel about life today?
Trisha: I am so privileged to be able to say that since March 27, 2011, I have been sober and I am loving life. I am present today for my family and friends and I thank God every day for the things He blesses us with. I strongly feel that God led me down this road so that somehow, some way, I can help others. Even if it is just one person that I can inspire to not give up, it will be worth it. Life is so worth it and I am grateful that there have been people in my life who truly do care!